jasonzeh.com
this too
http://whatweretapes.tumblr.com
Posted by Jason Zeh at 4:24 PM No comments:

Sound and Video Sample 2013 from Jason Zeh on Vimeo.

This is a mix of elements from various tracks combined with clips from the A Vacant Lot To Be In Artist edition VHS.
Posted by Jason Zeh at 8:24 PM 2 comments: 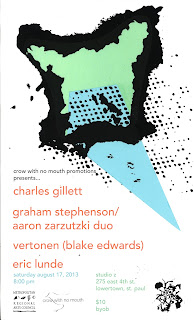 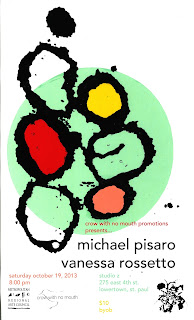 Crow With No Mouth 2013 Needs Your Help. 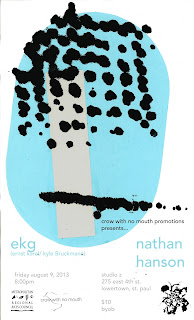 Please consider going here so that I can continue making these fliers for the series. I am unsure of the specifics, but it seems that one of the grants that Jesse had been awarded to fund this year's concert series ended up disappearing. Without your support, CWNM will be unable to fund the rest of the shows.
Posted by Jason Zeh at 1:18 PM No comments:

Jason Zeh - Polarity [Handmade Birds - 2012]
A simple but professional package, here, from Handmade Birds: a neatly printed inlay card, with introductory notes from Zeh; and a red cassette with on-body printing. The tape contains one long track on each side, both based around recordings of the electromagnetic fields produced by tape machines. Zeh picks up these fields using telephone coil mics, which convert them into audio signals. My small experience of using these mics, has normally resulted in pretty static, crackling drones and hums; so I'd wager that Zeh is achieving his sounds from mixing and layering his multiple tape machines' fields, as well as eq-ing.
Side A is a very static, strong drone; recorded live in October 2011. Constructed out of several layers of tones and hums, it pursues a straight line more-or-less until its end. Zeh tweaks his materials very subtly, with his main techniques pulling them in two quite different directions. The first of these is towards beating tones and throbbing pulses; the piece begins with a gently throbbing low end, and throughout the track these modulations rise and fall - though never with any overwhelming strength (thus maintaining the tension of the drone). The second direction goes the opposite way entirely: rather then playing layers against each other, Zeh somehow coaxes singing tones from them. Thus, tibetan bowl-like drones emerge from the main body of sound; before diminishing, and returning. The piece ends with the sounds of tape reels, amplified by contact mics; these rather decrepit rhythms carry the track to its close, with Zeh creating a nice stereo-bouncing effect.
The second side of the tape, according to Zeh's inlay notes, was created by subjecting recordings of electromagnetic fields to a "variety of tape-based processes of manipulation." The track begins, perhaps unpromisingly, with the sound of slurring tape - and then Zeh brilliantly grinds this sound into the ground. He doubles it, layers it; makes it resonate and reverberate - it really is a masterful piece of work. In terms of what's actually occurring, you might imagine (at the most basic level) someone manipulating a loop; but perhaps a more helpful notion is someone like John Butcher constantly producing a very short passage on the sax (trilling, even), with equally constant variations of tone, timbre and melody. There's a relentless, vigorous exploration of the initial slurring sound - in fact, Evan Parker would be the more obvious saxophone parallel, given his spiralling repetitions. Zeh teases out all kinds of colour, making the track growl and vibrate; building it into buzzing maelstrom with malevolent traces, before it decays down into a warbling drone. After this, Zeh breaks it further; till the listener is left with scratchy, hesitant whines and murky rumbles, slowly playing out in an ocean of tape hiss. Its quite mesmeric.
Whilst the first side of Polarity is undeniably competent and enjoyable, it's the reverse offering that truly makes a name for Jason Zeh. There are a few projects that properly explore the use of tapes and tape machines - rather then simply using recorded sounds on tape as source material - and it's sometimes an area that produces rather austere works, given the limitations of the "instruments." Polarity, though, shows Zeh to be capable of creating great colour, from the barest of sounds. I'm loathe to saddle him with the burden of "the acousmatic Evan Parker," but in case his future reveals that: you heard it here first.
Posted by Jason Zeh at 6:26 PM No comments:

from Aquarius Records.
ZEH, JASON "A Vacant Lot To Be In"
"The resurgence of the cassette as a viable media may provide an additional context for the work of Jason Zeh, as his gritty drone-noise constructions are entirely based on the contact points between magnetic tape and the tape heads that read / translate that magnetic information into sound. His approach to sound often deals with the dis...location of this contact point, which is akin to the way that Christian Marclay, Gum, or Phillip Jeck approach the turntable. Zeh might wield sandpaper to abrade the tape itself, magnetized razor blades to slice the tapes, leaving irradiated coronas of electrical hum near the edit, and even smearing globs of dirt into the gears and mechanics of the tape deck. All of these very tactile methods impart very tactile results, and as such, A Vacant Lot To Be In is much more akin to Chop Shop's obliterated tape saturation than the somber self-immolation found on William Basinski's Disintegration Loops. Both tracks on this vinyl only release rise through scabrous crumplings into a steady arcing mass of high-voltage dronework whose phase shifting patterns give the impression of an electrified sea of ferric oxide churning through tidal forces. One of the sides builds towards an intense crescendo of turbulent, boiling, junked noise, while the flip eerily navigates an insectoid minimalism. Zeh's work is very strong and deserves as much acclaim as we can muster, especially given his relatively low profile. Highly recommended for fans Joe Colley, Hive Mind, Mike Shiflet, and the more industrially slanted aspects of contemporary sound art. Oh yeah, limited to just 300 copies."
Posted by Jason Zeh at 4:45 PM No comments:

This Podcast contains some tracks from many of the New Media Art  and Sound Summit participants. My contribution is a track off of my forthcoming cassette release on Banned Production. I am really hoping that my copies will be here on time for my tour. Check it out.